There are several terms that are interchangeably used to describe the period when a woman’s ovarian and reproductive function changes. Menopause is a name that gets bandied around but is the time when a woman has ceased to have had her periods for 12 months. Technically, 12 months and 1 day after your final period is post-menopause. Peri-menopause is the transition period beforehand.

There are several types of menopause:

Every month, during a woman’s normal cycle, two hormones called oestrogen and progesterone are involved in a process called ovulation. When oestrogen reaches a certain peak, an egg is released from an ovary, this is ovulation. When the egg is released, a crater is formed, and this produces progesterone. Both oestrogen and progesterone then prepare the uterine lining to accept and nourish a fertilised egg. When an egg isn’t fertilised, the uterus sheds its lining which is when we bleed. During menopause, eggs are no longer released, and oestrogen is so low that ovulation no longer occurs resulting in low progesterone.

Post-menopause then kicks in and continues until the end of our life. In theory, this period should see those lovely symptoms experienced during peri-menopause reduce over time and eventually disappear. However, if hormones are still imbalanced then symptoms experienced during peri-menopause can continue to be experienced. Oestrogen is also made in other parts of the body and is vital for mental, cardiovascular and skeletal health, amongst other areas. When oestrogen is low, women who are post-menopausal are at risk of developing conditions such as high blood pressure and cardiovascular disease and osteoporosis. This is when herbs, nutrition and lifestyle changes including sensible exercising for our age is absolutely key to keeping us healthy, strong and symptom-free.

Hi, I'm Sarah. I am a qualified naturopath, nutritionist, and medical herbalist. I am passionate about inspiring others to transform their health and teach what I seek myself. I love food so there will be no cardboard bliss balls here!

Why the belly fat?

How to lose weight and feel amazing during peri/menopause.

The next 30 minutes could change your life.

In this free webinar, Sarah brings you up to speed on : 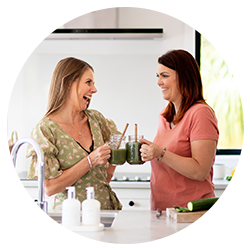 Sarah is a specialist in women’s reproductive health and Andrea specialises in women’s fitness during menopause. We don’t need to put up with the symptoms of menopause.  Together, we’ll show you how. 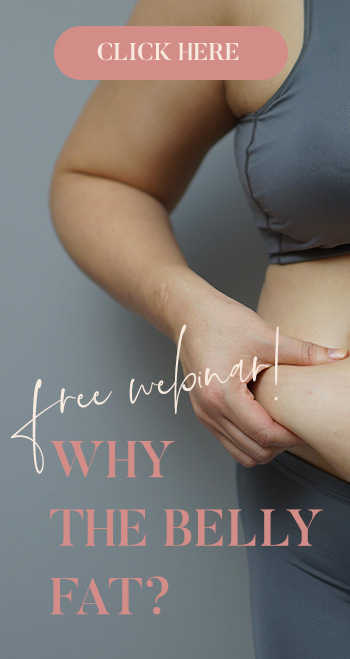